what's growing and not lately:Sundew , Pitchers and more

A boy of a friend is planting some CPS from seed with a kit. I thought I might as well give him some big ones to look at while he waits. I have repotted a Mexican butterwort and a sundew to give to his son. I also gave him a care sheet and a bottle of rainwater. A big CP carekit. I gave this to him a couple of days ago.

This butterwort has been shooting up pretty little lilac flowers with a yellow center.

The D. Adelae "lanceleaf" has pretty 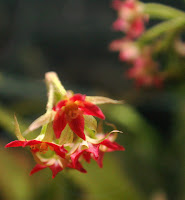 red flowers. Meanwhile some other ones are finally "dewing" possibly from the extra hour I put on the artificial timer and the added sunlight that is coming in from the southern window in front of the terrarium.

The D.Spatulata rosetta sundew I repotted. It hasn't been doing anything for over a year or more. No dew, no growth just sitting there. It was time to try something different. I repotted it. A couple of days ago I put it a little closer to the artificial lights. It looks like some stalks are turning dark so we shall if that is bad or good or what. Hopefully it is getting rid of the old and getting ready to renew some new stalks. 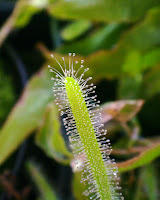 The D. Alicia (left) is growing very nicely under the grow lights. Lot of dew and the stalks are arching toward the lights.

The N. Spectabilis I did repot and it has done nothing for well over a year. Well it finally died big time. Maybe something will sprout instead. Not yet though. So I will not throw it away just yet. 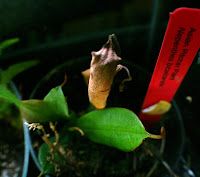 The N. Bicalarata has several new stalks but the leaves are so small. It is said they are easy to grow but I guess not for me . The Savage Garden book says it need hot, high humidity. Maybe the environment is not hot enough or humid enough. It is a lowland species like the N.Amp so they should both do well.


The only thing is pitchers are not forming. They get the little "nub" at the end but don't produce.
Maybe a little spray of orchid in water may help?
Posted by Dr. Eric Flescher (dreric1kansas@aol.com) at 9:31 AM No comments:

Well soon it is will be time to repot my towering Ampullaria. 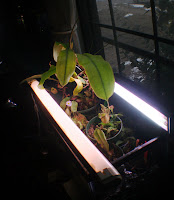 This N. Ampullaria has really grown.

The pitchers of this species grow a vinelike extension that drapes away from the main plant off of a leaf. A little bud grows on the tip. As it grows a little lip starts to form as well (on the right top).
. 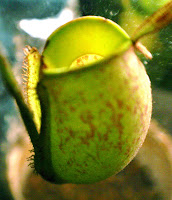 I also measured the biggest pitcher which is 1.5 inches and other are 1 inch or less.

There are also little a crowd of tiny pitchers around the main stem in different places . I can call these ground or lower stem pitchers. Soon it is will be time to repot my towering plant

I have already started to repot the cp plants as one should do at least yearly to cleans the soil and renew it.

I repotted the N. Ampullaria last year and that seemed to spur tremendous growth. I hope it won't alter its fantastic growth.
Posted by Dr. Eric Flescher (dreric1kansas@aol.com) at 8:09 AM 1 comment: